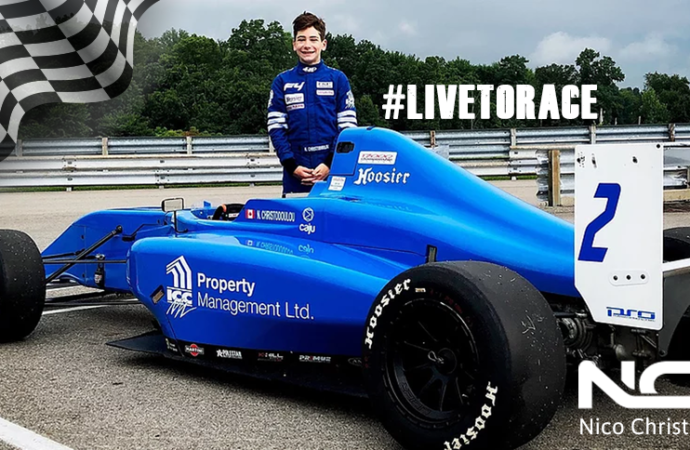 He’s only 14 years old, has the need for speed, and is always making Canada proud while racing laps around the track with total precision.

Meet Nicholas Christodoulou, better known in the motorsports’ world as ‘Nico,’ and many contend that he will one day join the ranks of Formula 1 race car drivers. This is his dream and winning more races and attracting big-name sponsors will help him soon race in the big league.

Over the last year, Nico has been busy representing Canada on international racetracks, and his first Formula 4 win came at the NACAM Formula 4 Championship in Mexico City. Held at the Autódromo Hermanos Rodríguez on October 26th in front of a sold out crowd of 345,000 people, the event attracted scores of leading F4 drivers from across Mexico, Brazil, the United States, and Canada.

“I am so happy with the big win, and I am very humbled with everyone’s support,” says Nico. “The biggest thrill was to bring ‘glory back home’ to Canada, and of course it was unbelievably awesome to line-up on the same grid as the F1 drivers at the Mexican Grand Prix. The experience in Mexico City was truly amazing and it’s one I will never forget. The credit goes to my Mom, Dad, Sisters, friends, coaches, team, and fans for supporting me and cheering me on!”

The young motorsport celebrity has many accomplishments and is looking to continue this momentum, stepping up to F4 from a winning karting career. As the youngest F4 driver, he will be continuing to race in the FIA F4 NACAM Championship this winter, and has signed with DeForce Racing for the 2020 USF4 Championship series.

Nico is now widely popular on the international stage, and here at home he is a hometown hero. In fact, last December he was formally Introduced to the entire Legislative Assembly of Ontario at Queens Park and recognized for his long-list of achievements in racing, and Nico also had the opportunity to express how proud he was to represent Ontario and Canada on the world-stage.

So, what are his next goals? You guessed it – they are huge!

“I will continue to hone my skills in racing and my big plan is to win premier open-wheel championships on my way to IndyCar or Fomula 1. I also want to work with even more sponsors and help to support their brands,” says Nico. “Racing is like life – it’s not easy, but I will work hard and continue to make my family and Canada proud.”